F8S News? Yep, Ole Man FaTe[F8S] finally figured out how to use Dreamweaver, which should make updating my sites a ton easier. No...really!

As far as F8S goes...Yes we are still around and kicking. We ended our competition with BF2 about a year or so ago. As a result not much has been happening in any sort of organized fashon. But we are still hooked up, just waiting for a game we all like. There sure are planty of choices, that's for sure. TF2, QUak=ewars, COD4 and the upcomeing Frontlines"Fuel of War are all possibles.

First a little general news...There is a lot of heat lately about the upcoming release of BatttleField2...we'll have to see if it becomes the game of choice for F8S. But for now we are still plugging along on the Desert Combat STA ladder and playing Counter Strike:Source on a fairly regular basis, often populating our server with bots to fill in the gaps while waiting for enough Minions to show up.

And speaking of Minions, we have a new one...a big F8S Welcome to billybob[F8S] who was unanimously voted in...he is now F8S for life! The amazing thing about biillybob[F8S] is that he is only 14 years old...and as anyone who knows F8S knows, we generally don't even consider anyone under say 40 or so!!! (Well at least over 20 anyway.) But this guy is for sure F8S and when your F8S we gotta let you in. And if BB has any doubts about what F8S for life actually means he should chat up Sodder[F8S] who wandered off three or four years ago and just recently wandered back in...Soddibles just dusted off his old stool in the corner of the batcave and got back to kickin ass and takin names! Great to have you back Sod...now get your brother Chunks[F8S] and your bud Zac[F8S] back playing and it will be an old school fragfest!

Yeah I know...over a year since the last News update. Lots of stuff has happened. Doom3, HL2, CS: Source, new members Dutch[F8S], Bi$hop[F8S], and Gun$linger[F8S]and lots of other stuff that probably should have been posted. But the thing that drove me to finally take the time to update this page was a 4000 x 3000 pixel 5meg plus screen shot of the Stroog Marine from Quake IV!!! Click on the picture below to get the full sized one! 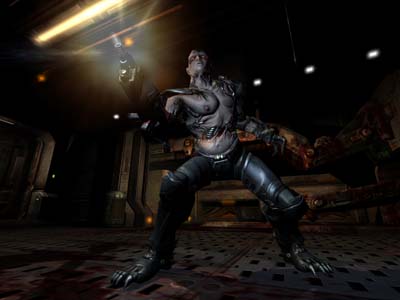 F8S's match last night's Desert Combat was a real barn burner...we had a blast playing against our old pal Wallace and the gang from Forgotten OutlawZ.

These guys are great and we had a lot of fun...and for a change won. But that is NOT the whole story...the real amazing thing was the ending of the last map. We were playing on Oil Rigs as Coalition and had to capture and hold all of the other team's flags to freeze them out or just fight til the end and see who had the most points. Of course, a freeze out is the best but very hard to accomplish since you have 10 players spread across 5 flags. Well about 3/4 of the way through the map things were looking good for F8S...we held almost all of the flags...and they held none - which means that none of their players had a spawn point and all we had to do was hunt down the remaining players before they could turn a flag back. Of course, if they did manage to turn even one flag, the rest of their team would come storming back into play in a few seconds and all our team's effort would go for naught.

Their last player was playing as a sniper and was a clever fellow, good at stealth. We hunted and hunted but could not find him...then one of our members better known for his team kills than for saving the day - Hambone[F8S] - stumbled onto their last man and almost got killed. But ole Hammy had the presence of mind to do the only sane thing when confronted with an enemy...run away, then sneak around behind him and take him out...thereby winning the match for us!!! Way to go Hammy...you are the player of the week - week hell...you are player of the year!!! 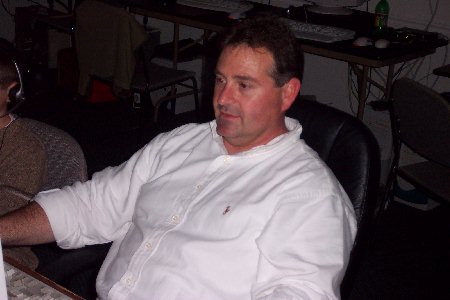 F8S did not make the CAL playoffs this round...but we sure went out with a bang. And like the Guvinator says...We'll be back!!!

Yeah yeah...I know...where has FaTe[F8S] been off to and is this news thing just a fading memory. Two posts on one month last April...then nothing for 10 months! What crap. Well you will get neither an apology or an excuse from me! I guess I am just not the blog type. But at least I trimmed down the News list and archived the past 20 months or so or BS. So now there's plenty of room for new news!!

F8S is running just fine. We are competing in two Desert Combat ladders - the Cyber Athletic League and Stronger Than All. Two matched each week is a a blast and sometime we win and sometime we don't - but we always have fun fun fun. If you are interested in joining us for some Desert Combat fun, come visit our DC server at 216.86.169.28. We also maintain a full time Counter Strike server at 216.86.169.26 and for you real old schoolers, the game that started it all for F8S is still running on our Quakeworld Thunderwalker server - 216.86.169.26, (if you need them - all the files you need for the full install for this great game they are available HERE ). So, stop by anytime you like and come frag with FaTe's Minions!!!